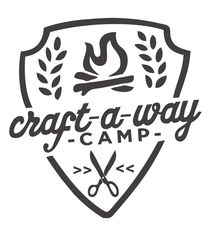 A few weeks ago (ok, maybe a month- time travels WAY too fast these days!) I was reminded about Craft-A-Way Camp thanks to FB and its incessant need to stalk my interests and friend groups. As per usual, FB wins and I applied to join the adventurers that run craft-a-way in the middle of the Michigan woods all by my lonesome since I couldn’t convince any of my crafty friends that no electricity and no running water shouldn’t keep us away from a weekend of crafting in the woods in the beautiful lower peninsula. I’ll be honest though – I wasn’t in the least bit prepared for this weekend and what it brought to me. I tried to be. I purchased and borrowed a few new camp gear items that I didn’t already own (a camp chair good for crafting/sitting at a table, bug spray,  a headlamp to craft into the night) and unearthed those items I already owned (a lantern, a cooler, my ability to sleep anywhere) and printed out the map of the Rec area where craft-a-way was to take place. I made plans to get the store covered for the days I was to be gone and found a place to crash the night before camp was to begin at 8:00 am because I’m a stickler for being on time. But, really, nothing could have prepared me for the camaraderie, team spirit, helpfulness, confidence-boosting mentality and CRAFT that really happened this weekend.

If I could sum up craft-a-way with a simple play by play . . . it would go something like this: 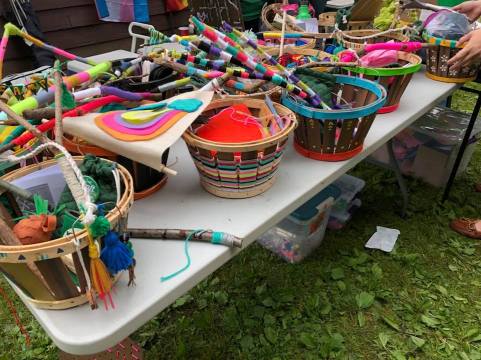 AND THAT WAS JUST DAY ONE!! Day two: 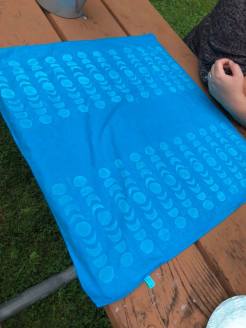 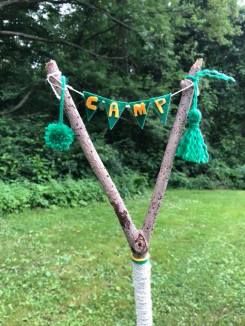 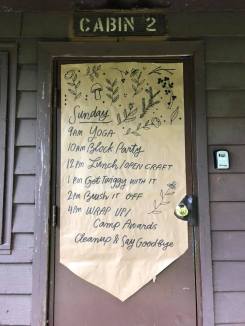 So yeah – it could just be a play by play, because damn, those plays were good! Damn good. But it’s not about the play by play. It’s not even about the finished projects. We all made cool stuff. REALLY FUCKING COOL STUFF! But, it’s about the friendships. The laughter. The inside jokes. The bonds that are made at camp, and will forever be at camp, and if you’re lucky enough, beyond camp . . .

See, here’s the thing. I never did camp as a kid, but I know what community is. I work hard every damned day to continue creating and fostering our community here in Bloomington- whether it’s our business community with Bloomington Brick and Mortar, our Gallery community with Gallery Walk, our Craft Community with Bloomington Handmade Market, or some mix of the three with Gather.  But sometimes, those lines get really blurred, and we get caught up in the logistics, in the details, in the mundane rules and regulations. But camp – camp made it all so very clear. Watching these humans BUILD EACH OTHER UP with every chance they got! Seriously. I can’t even explain what it was like to sit around a table with 26 other humans who were all essentially creating versions of the same project, but when one would finish their neighbor would “ooh and ahh” and then the ENTIRE GROUP would yell ‘show it off’ and then compliment after compliment would RAIN upon them. And it was REAL and it was AUTHENTIC and . . . awe-inspiring. It’s making me tear up right now. Craft-a-way was fucking magical. MAGICAL people! These people truly Love each other. And they aren’t afraid to show it. STOP BEING AFRAID TO SHOW LOVE AND AFFECTION! It wasn’t about competition. It wasn’t about who was better at something. It was SO inclusive! It wasn’t about what we each make or do in our ‘business lives’. It wasn’t about us individually, it was about camp. It was about creating, being supportive, and friendships – no matter what.

Truth be told (let’s see who reads this novel) it was hard for me. I was quiet. I was withdrawn. I was worried. Why? I don’t know. It’s hard for me to delve that deep in a blog post meant for the store, for the public. But, it’s hard coming into a group. I think we all know that. As adults, as children, as teens – it’s never easy coming into a group of people who have already bonded. These (mostly) Michigan crafters are well-bonded. They’re best friends. They spend every weekend (nearly) together doing craft shows and then some. They’ve done camp for going on six years (some of them). They know each other’s ins and outs – each other’s children, significant others, and pets! – each other’s crafts and other interests. I wasn’t the only newbie. And in fact, I knew a handful of veteran campers on account of BHM and Gather. But, I was still scared. I’m always the loud one in our group. The one in charge, if we’re being honest. And sometimes, sometimes it’s real hard not to be the one in charge. It’s hard to change your power dynamic. Ok, hard for me. And I knew all this going in, and I still did it. I’m not looking for a pat on the back. No no no. But, what I’m saying is – sometimes it can be a challenge. And sometimes the entire experience can be a challenge- but you can still grow from it. And learn SO fucking much from it. And still, thinking back, whilst having regrets about not being as open or ‘fun’ as you could have been, knowing that you can always go back, and make a better first impression is what can save the day.

I know what I’ll take away from camp, and I truly hope it lasts a lifetime. And that is the spirit. The spirit of camp is Love. The laughter. The building up. The bonds. The openness. One of my favorite things about camp is that Amy (1/2 of the married couple who organizes the event) required/requested us to move from our ‘spot’ at the crafting table at least three times (maybe four) throughout the weekend so we could meet new people and form new bonds. That was so clearly important.

It’s about Love. Showing Love. Being Love. And that’s something I will never forget.

**of note – I challenged myself to be TRULY present at camp, and thus, I took LITERALLY no photos and left my phone in the super cute ‘sleeping bag’ Amy made each of us for camp. So, the photos you see here are either from other camper’s accounts of camp (photos by Lil, Abbey, Amanda, and Jen), or my ‘after’ photos of my somewhat completed projects at camp. It’s not because I was *so* withdrawn that I couldn’t bring myself to take photos . . . it was actually quite the opposite. Though, I will say next time, I’ll actually pull my REAL camera out of my bag and take photos because, for me, it actually puts me in the moment a little bit more. We all learn, even me sometimes 😉