Another week, another blog post. I’ll be honest – I don’t (feel like I) have much to write about this Sunday. Our week went by pretty uneventfully. The weather was interesting (rain, wind, more rain, more wind), the ebb and flow of the shoppe continued in its spring haze, and then the weekend came. With the weekend came our April Gallery Walk, where we hosted Vanessa Monfreda, an Indianapolis based artist I met about 6 years ago at the INDIEana Handicraft Exchange (both our first). We hadn’t seen each other in quite some time, as we both have children and jobs and live hours apart and quit the show scene some time ago. But, as Fate would have it, last October we hosted Alyssa Noelle (whom I met thanks to a show at Blueline the season before) and Vanessa waltzed in our door to visit the show and her dear friend Alyssa (they’d worked together at the Eiteljorg years before) – without even knowing the shoppe was mine. And that was that. We planned her gallery show then and there, and five months later, here we are. Life is funny that way, no? The way you first meet people, and how things change and evolve and they do or don’t become a part of your lives in a different fashion down the road.

That’s a familiar conversation actually. See, I boast (and I’ll say boast boastfully as well) that I KNOW personally no less than 80% of the artists we carry in the shoppe. We’ve met face to face, or at the very least carried on long conversations via Facebook or Instagram. And I never want that to change. I never want to carry so many makers in the store that I can’t tell you where they’re from or at least part of their story. My brain is only so big, so part of their story is pretty much all you’re gonna get, but know that I have a personal connection with the majority of our makers. But, and this is where that familiar conversation comes in – our relationships now, as opposed to when we first met, are likely so different – and it’s so Lovely to go on that journey… 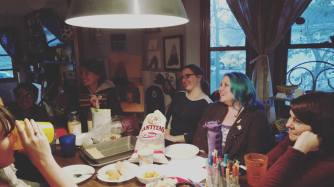 This Saturday evening I had the pleasure of hosting a dinner at my home for my dear friend Sally (of Sadly Harmless) as she returned to Indiana for a weekend visit. I was able to get many of our ‘crafties’ reunited for a few hours so we could all catch up and check in. Conversation, as it often does, fell to ‘how we met’ and ‘how things have changed’ and it’s always just so interesting to me to fall down that rabbit hole. Especially with my crafty buds. I won’t bore you with the details of how I met (and then became friends with) each of the dozen or so ladies that I hosted last evening. I will say it wasn’t me walking up to them and simply stating, “You’re cool, I’m cool, we should definitely hang out,” (a conversation was had about how to meet new friends, in a new town, when you’re an artist thirty-something who spends 12+ hours alone per day….). But I will go into one – one that isn’t all that interesting (likely) to you, but, for me, I will always say it got me to where I am today – in this store, writing this blog.

Many many moons ago, I lived in a dorm on the campus of Indiana University and worked in the dining hall of said dorm. In that dormitory (ok, I’ll just say it – it was Collins) I forged friendships that would last a lifetime.  (If you’re familiar with Collins at all, you’ll know this for yourself to be true, but, this isn’t that story.) And I saw faces that in the next …wow…16 years,  I would continue to see and know, “hey, those are cool people, they can be my friends,” Sally Harless was one of those people.

Then, years later, 9 to be exact, I received an Etsy conversation from a stranger. A mass message that (thank goodness) I took personally, and changed the course of my life for the next 7 (and counting) years. This stranger (Sally of course) had invited me to apply to the first Bloomington Handmade Market. Just because I had an Etsy page. And I did. And I got in. And then I met Sally, Nicole, and Mia for the first time. With a 6 month old on my hip.

We did not become fast friends. That’s not what happens with Sally. Or me. But I continued to do the Handmade Market, and I continued to make and become part of that community. We saw each other at shows. We spoke occasionally. She opened Paper Crane (with a handful of other people) and I visited that establishment and eventually became a volunteer there. Maybe that’s the point our friendship changed . . . when she knew she was never going to get rid of me. Who knows. I can never pinpoint the exact moment. But, we were friends. And have been ever since.

At some point she invited me to join the organizer team at the Handmade Market, and I did. And that is likely what sealed the deal. Sally ended up moving to St. Louis two years ago, and now the BHM is left in my hands (and the hands of the amazing co-organizers I have in Jaime and Chelsea). And now I have a shoppe where I carry her work. A piece from her thesis show hangs in my studio – with a meaning that I have to personally ascribe to it. “We will never be apart.”